It has been a long year, but I am finally back in a place physically and mentally and emotionally where I think I’m ready to fully dive back into the rigors and rhythms of what creating this blog entails. I have started a new job that grounds me and gives me a regular schedule, so I foresee a much more active year on ‘The Lamp In The Firehouse’ than 2020.

Speaking of the worst…

Sorry, that’s probably being too harsh, and I can feel my brother gearing up for a fight from here.  I’m not a huge fan of ‘The Fox And The Hound’, but fortunately enjoying the film I’m making a recipe for is not a prerequisite for me. I will say I enjoy the beginning of the movie, where they are cute little friends.

When I originally sat down with my journal and wrote out all the Disney titles I would be taking on for this project, ‘The Fox And The Hound’ was always a question mark.  And while this dish was pretty awesome, I will admit you have to kinda squint at this one to see the connections.  I’m not un-self-aware here; I understand that my apathy-bordering-on-dislike towards this particular movie probably is the reason I couldn’t think of much for this film, but had many layers to my reasoning on ‘The Little Mermaid’ earlier in our run.

This may still be the greatest thing I’ve made for this blog.

So the story of ‘The Fox And The Hound’ centers around two feuding neighbors and their pets becoming doomed-from-the-start friends.  With that in mind, I chose to approach this recipe in  a rather straightforward way. There are chickens, there is a farm.  There is a scene where a milk can gets shot and leaks.

I told y’all you have to squint at this one.

I started by chopping up some cooked chicken thighs and bacon into tiny pieces and making them into croquettes by adding in a binding of a basic white sauce and then chilled it until it set up like a thick pudding.  I breaded and fried them and then added them into a soup made of pureed potatoes and leek.

For anyone who doesn’t know, leeks are in the onion family, and actually look like a giant green onion when you find them at the grocery store.  They are a much milder flavor than a regular onion as well, so this soup was in no way an overwhelmingly onion-ey experience. The soup itself was actually super easy to make.  I just cooked down the ingredients and then put it on the ‘soup’ setting on my blender and- 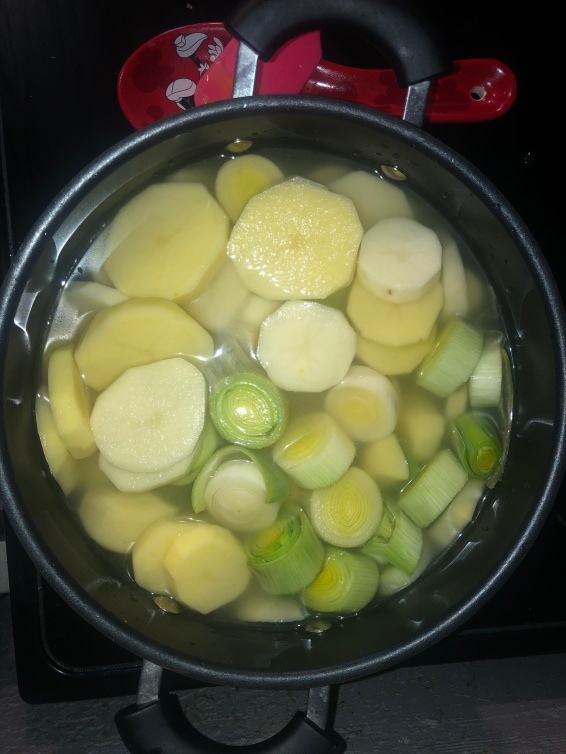 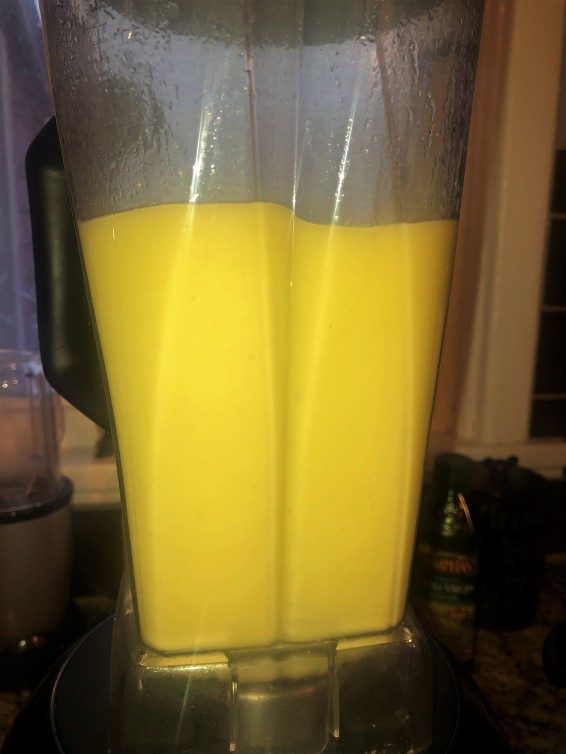 Voila! A smooth green and creamy soup came pouring out.

This was actually a reconceptualization of a dish I made last spring that I was never happy with that included mashed potatoes, roasted chicken, and melted leeks.  I have never gone back to a dish for this blog and tweaked it before this one, but it was the right call.  While my better half said he enjoyed the original (and he pretty much says that for everything I give him),  it was just not as appetizing or interesting as this final product.  So all’s well that ends well…..several months later.  Either way, let’s not wait so long to do this again, guys. Onto the recipe now!

Zest of one lemon

Place the garlic and butter in a stockpot and cook to soften garlic.  Add the leeks and potatoes into the pot and cover with chicken stock.  Cook until the potatoes and leeks are soft.  Season with salt, pepper, and lemon zest.  Blend in batches until completely smooth.  Re-season as needed.  Keep warm until ready to serve.

Place the butter and onion in saute pan and cook until the onion is soft.  Add the chicken and the bacon to the onions and coat with the melted butter.  Sprinkle with 1/4 cup flour and stir to coat the chicken.  Whisk in 1/2 milk and cook until the sauce thickens.  Add in the thyme, dijon, and garlic.  Add the mixture into a bowl and chill in the fridge for at least 2 hours.  Scoop the mixture and roll into balls.  Coat with remaining flour, then dip in remaining milk and coat with the panko bread crumbs.  Fry croquettes in deep fryer or a pan on the stovetop.  Drain on a paper towel and place in bowl before carefully pouring soup into bowl. Garnish with a drizzle of olive oil, a grate of fresh nutmeg,  a dollop of plain Greek yogurt, and fresh parsley.

So, like I said earlier, this was my first re-do of a recipe because I was unhappy with the final product.  I can say that it was a good decision.  This soup was a tasty and filling supper to have on a cold, snowy night.  Have I mentioned it’s cold?  It is.  Stay warm.  Eat some soup!

*Note: Almost all of my photos from this recipe got deleted off of my phone somehow, so there’s not much as far as pictures this time around.  I hope the massive amount of 25- year old gifs made up for it!