One Man, One Woman, Eight Decades of Disney Animated Features watched in order, and the overly complex system they invented to grade them. These are our thoughts, rants, and observations.

This is Disney By The Numbers.

In 1923, long before any yodeling dwarf would make its way onto celluloid, Walt Disney, Ub Iwerks, and the gang made a series of live-action/animation hybrid films called ‘The Alice Comedies’.  They revolved around a young girl, her cat Julius, and their exploits amidst animated landscapes inhabited by dancing bears and saxophone-playing donkeys.  Many of them are on YouTube, and they are as odd as you might expect.

While these shorts were not like ‘Alice In Wonderland’ except for name (with the original film even being called ‘Alice’s Wonderland),  it showed Disney’s intentions towards creating a world where a girl may be confronted with situations that she isn’t familiar with and possibly doesn’t understand.

This would be a good time to point out that this particular post isn’t written by the usual author of this series.

Yes folks,  I’ve hijacked this film for myself!   We are truly through the looking glass here.

Because it is in the public domain, there have been many different adaptations of Alice.  Some have… not worked.

Some have really not worked.

Some are amazing, but maybe not…well-remembered.

Disney’s original version of Alice In Wonderland, however, has a very special place in my heart.  It is a film we had in our house from a fairly young age.  I have a distinct memory of splitting a cookie in half and pretending it was a mushroom, climbing up on the couch when I took a bite from one piece and then shrinking down to fit under the table when I took one from the second piece.

All this nostalgia is well and good, but how does it do when you really look at the numbers?  Let’s find out! Down the rabbit hole, everyone!

Alice In Wonderland was set to be the very first Disney feature-length film, utilizing the live-action/animation hybrid he had first used for the Alice Comedies.  However, technology wasn’t quite caught up to where Walt needed it to be to achieve the end result he was looking for, and the project was shelved to make way for Snow White.  When Alice was revived in the late 40s, the hybrid concept was no longer being considered.  All of this is by way of saying that Walt was very committed to the idea of adapting Alice to film, although maybe not as much as some others.

Based on two of the most famous novels of all time, 1865’s Alice’s Adventures In Wonderland and its sequel by Lewis Carrol, Disney had an uphill battle on his hands.  People were already very familiar with the story and especially the illustration of Alice. 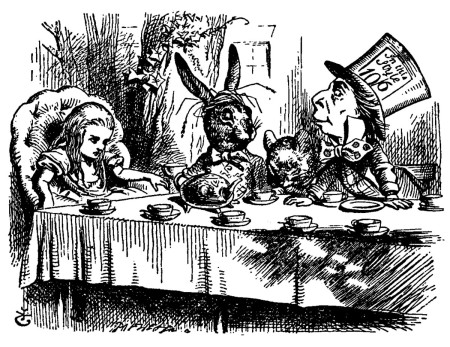 The original novel is still considered one of the most confusing and possibly frustrating children’s works of all time.   The themes of growing up and being misunderstood are obviously universal, even if they are somewhat annoyingly laid out to the audience. That isn’t necessarily a bad thing.  This was, as with many other children, the first version of Alice I ever saw, and served as a great primer for the literary work. It’s like the ‘Kidz Bop’ version, slightly watered down and made more easy to digest for mass Disney consumption.

Beyond the theme, this movie meanders, which I suppose is the entire point.  The dialogue is wonderfully reminiscent of the novel, used with little editing in parts.    There are touches of comedy here and there, but it’s slight chuckles at slight moments.  The scary elements are all but gone, resulting in a general lack of drama also.

Music is, in my opinion, the most important thing in a Disney movie.  Good, original music truly is what sets Disney apart from their competitors in the animation game.  Most of the greatest Disney moments involve music.

Okay, that was actually harsh.  This film has some really good and memorable tunes.  Some of them, such as ‘Old Father William’ and ‘The Walrus And The Carpenter’ even use Carroll’s words as the basis for their lyrics, dark as they may be.

The film opens with a classic, albeit forgettable Disney-sounding tune which seamlessly transitions into a kind of dull ‘I Want’ song. It is pretty watered down. It’s a long way from ‘Go The Distance’ or ‘How Far I’ll Go’ or even ‘Let It Go’.  It isn’t until White Rabbit shows up that the soundtrack really kicks into gear.  Songs like ‘Very Merry Unbirthday’, ‘Painting The Roses Red’ and ‘Golden Afternoon’ are synonymous with this version of Alice.  It’s within these songs that my strongest and most pleasant Disney memories exist for the movie.  The songs really help create a throughline in what otherwise feels like a collection of unrelated character meetings lined up one right after the other.

The score is pleasant and feels very time period-appropriate, but isn’t anything you’re going to find yourself humming often.  Which…I definitely never do with Disney scores.

As I mentioned before, as much as audiences were tied to the story points of Alice, they were more tied to the original illustrations, drawn by John Tenniel.  His depiction of Wonderland is still widely considered the most famous version, and it is what has borne all other versions of the characters.

Having said that, this film gets closer that any other version really gets to making its own mark on the material.  Obviously, I’m not a good litmus test for this kind of thing, but it is the Disney version of the Cheshire Cat or the Mad Hatter that I immediately picture when thinking of Alice characters.

The design of the denizens of Wonderland takes what had come before it and adds to it, resulting in a beautiful-but-very- Disney iteration of these classic characters. There is a sequence where Alice finds herself surrounded by Disney-created creatures that feel like the perfectly fit into this version of Wonderland and add a great glimpse into the imagination of the animators.

The use of color in this film is so beautifully vivid, possibly the most colorful film to come in the canon yet at this point. The character designs are all purposefully Disney; it’s a delight to watch.

In all Disney movies, there is some semblance of a love story.  Sometimes, it’s between siblings or parents and children; sometimes it is romantic, and other times, it’s a strong friendship.

This movie has none of any of that.  The issue with adapting a story that is a collection of wacky characters that are an allegory for growing up is that it doesn’t necessarily lend itself to having an emotional core to it.  Alice likes her cat, and presumably, her sister.  Other than that, this is a pretty dry well.

Alice is a strange Disney protagonist.  We meet her laying about in her backyard, kind of lazily wishing she could be somewhere else.  It’s hard to like her initially.  Thankfully, she kickstarts the plot pretty quickly by falling down the rabbit hole and in short order, finds herself a stranger in a strange land that she doesn’t understand.

The real issue with Alice in every version of this tale is that she’s the straight man, a thankless role in which she is just a real-time reaction to the weirdness that is happening around her at all times.  She doesn’t necessarily feel like her own person, because we learn very little of her.  She has nice hair and seems well taught and well-spoken.  She loves cake.  She cries a lot.

That said, her screentime is enjoyable.  She’s charming and gets to be funny occasionally.  We as viewers need someone to be pointing out how strange/annoying/crazy the other characters are, and that is the job of Alice in all versions of this story.

(This is all from just one scene involving Carol Channing being…well, her)

Alice doesn’t seem to learn much from her time in Wonderland, except that maybe she needs to grow up at some point in the future, which was going to happen anyway.

If there’s one quote everyone could probably recite from this film, it’s ‘Off with his head!’.  The Queen of Hearts is one of the most recognizable villains in the Disney canon, so feared by her servants and subjects that Alice finds her majesty’s playing card guards painting white roses red to keep from being killed.

Before we even see her onscreen, we as an audience are building expectations of the Queen of Hearts.  When we finally meet her, we are faced with someone who is not necessarily going to strike fear in our hearts.  Where villains like Scar or even Lady Tremaine seemed like they would be capable of any level of atrocity, the Queen of Hearts is fairly ineffectual.  She spends her screen time trying to keep herself from looking like a fool and pretty consistently failing.

Basically, she’s a giant toddler, but she has a great character design that makes her look good in the Villain Lineup. She does have a  So while technically, she’s the villain of this movie,  she could be much better at it.

Alice In Wonderland has no shortage of great supporting characters.  In fact, it is the supporting characters that without question make this movie as memorable as it is.  The Caterpillar, the Cheshire Cat, and the Mad Hatter are entertaining and frustrating in equal measure. 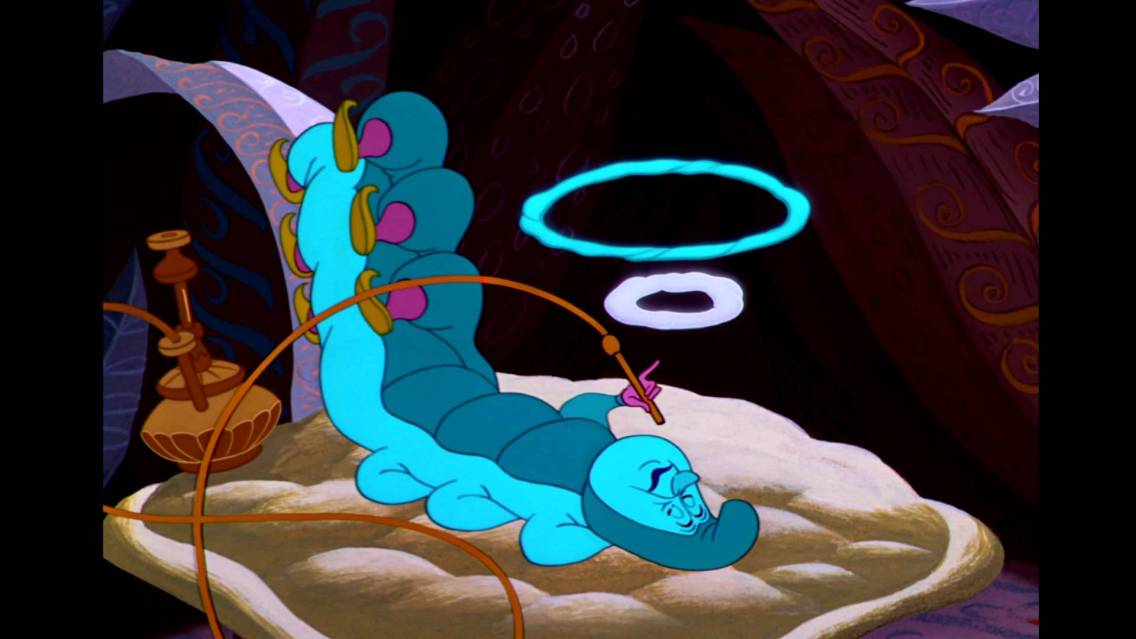 Even the tiny throwaway visual puns, such as the bread-and-butterflies or the dandy lion, work very well here.  If only any of them actually related to Alice in any way.  She’s the least interesting thing in her own story, sadly. 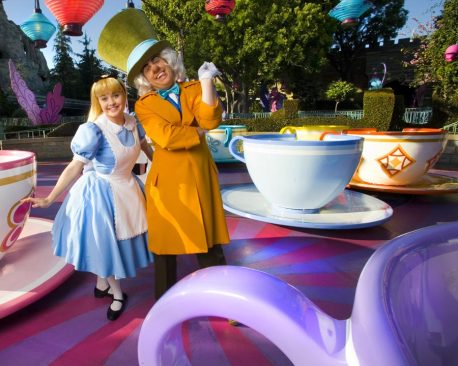 Theme Park Presence: 1
Timelessness: 2
Impact On Culture: 2
Scope Of Audience: 2
Disney Feels (Or Did It Make Us Cry?): 0

Alice In Wonderland, while not an amazing movie, has a fairly good legacy to it.  Even if you haven’t seen the film, you recognize the characters immediately. Nowhere is this more evident than in the Disney Parks themselves, where you can likely ride on one of multiple (!) attractions that are themed after it in locations around the world.

People love and are drawn to the world of Wonderland, and have been for generations.  It seems like a great world to wander around in for a day and then return to the safety of your home afterward, which is exactly what it is.  While it doesn’t hit you in the feels necessarily, the movie has a old-fashioned charm to it that Disney hasn’t quite matched in some ways.

I loved this movie as a kid, and would watch our old VHS of it quite a bit.  Returning to the film as an adult, however, had me worried.  So often, we remember things from childhood as better than what they actually are; we are a generation obsessed with our own nostalgia as it is.

While some movies we got right (‘Goonies’ is still awesome), others were very, very wrong (was ‘Labyrinth’ always so….creepy and kind of awful?) Had I remembered correctly? Was it great?

The answer is- it’s very okay.  Visually it is spectacular and has some of the most famous supporting characters in all of Disney lore.  It’s got some very hummable tunes and a plot that you don’t really have to pay much attention to.

The style of the animation and the source material make this work evergreen and timeless in a way a lot of Disney animated films can’t maintain, especially not for 60-plus years the way this one has. Don’t believe me? Check out what’s up next…