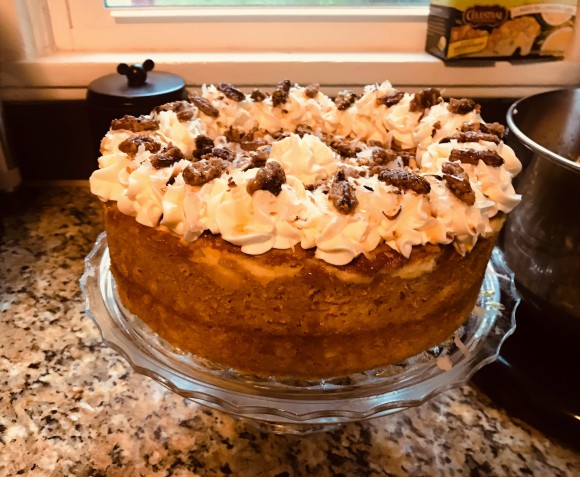 While sledding with friends in December of 1996, I made the terrible choice to take my inflatable tube down something called Dead Man’s Curve.  I unsurprisingly ran into a tree at a very high rate of speed.  The pain was excruciating, as was the experience of being dragged back up a hill by two eighth graders.

Two hours later, after a long wait in the emergency room that involved what I remember to be an awkward run in with a young male doctor, I was in the back of my mom’s mini van waiting for her to return with my prescription so I could finally go home.  When my mom finally came back to the van, she handed me a small paper bag.  I opened it to find this guy:

It was my first Disney Hallmark ornament and it still resides on one of my Christmas trees every winter.  Through all my time laid up in my bed over the next week or two, I had the A.A. Milne hardcover book by my side, with my parents and younger brother each taking turns reading it to me in spurts to entertain me.  It was the first time I had ever read it all the way through, and I found a level to enjoy it on beyond the shorts I would catch on Disney Channel’s free weekend when I was younger or the Saturday morning cartoon that was on the air at the time.

All of this is to say that I love the Hundred Acre Wood gang and the original 1977 feature ‘The Many Adventures Of Winnie The Pooh’ holds a very special place in my heart.  The 2011 sequel, ‘Winnie The Pooh’, on the other hand?

But this isn’t about judging the films, it’s about creating a recipe that it is based on.  I knew I wanted to do something based on carrot cake for Rabbit, and something that involved Pooh’s favorite food in the whole world.

Because I’m trying to challenge myself with at least one element every dish, I really wanted to attempt a carrot cake/cheesecake hybrid.  I make each of these things on a fairly regular basis for my job, but I’ve never put them together into one mega-dessert like this.  I added lemon, honey, and chamomile tea to the cheesecake for the British tea-drinking that is present in the series.  And there you have it!

Now let’s get to this recipe already! 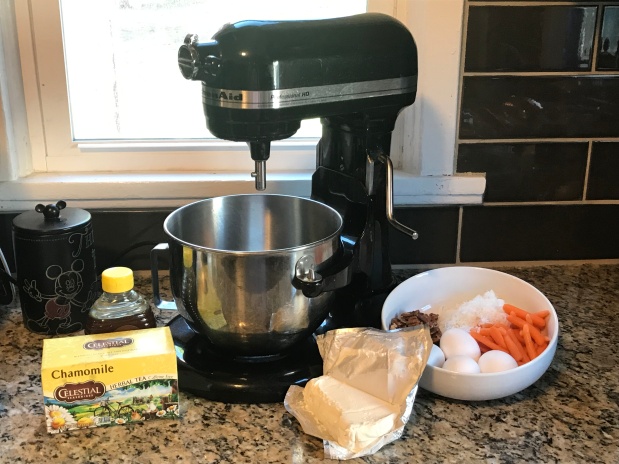 To Make The Carrot Cake Layer:

In small bowl, sift together flour, baking soda, and cinnamon. Using the paddle attachment on your mixer, combine the vegetable oil and the sugar and beat for several minutes until smooth and light in color. Add the eggs and continue to mix. Stir in the dry ingredients and mix until combined. Finally, add in the coconut, carrots, and pineapple. The batter will be quite runny.

Wrap a 9” springform pan with heavy duty aluminum foil. I wrap the base plate section separately and then lock it in to the ring and then wrap the entire pan in at least 2 more layers of foil, making sure to have the foil go straight up the outside rather than folding it in over the edge. Grease the pan and then pour in the carrot cake batter.

Bake in a preheated oven at 300 degrees for 30 minutes. The cake will still be very gooey.

To Make The Cheesecake Layer:

Pour the heavy cream into a microwave-safe bowl. Heat for 1 1/2 minutes, or until the cream begins to bubble at the edges. Stir with a spoon and then place the tea bags into the cream. Press them down into the cream, making sure they are completely covered. This will give the cream the flavor of the chamomile tea, the same as steeping in water. Let the tea bags rest for five minutes before removing them, squeezing them down with a spoon to extract as much tea flavor as possible. Stir in the honey and the lemon zest and then set aside to cool.

Place the cream cheese and the sugar in the bowl of your mixer and turn on medium, using the whisk attachment. Mix for three minutes before stopping to scrape down the sides of the bowl. This will make sure you don’t have leftover cream cheese that isn’t incorporated. Mix for another 3 minutes before scraping the sides of the bowl one more time. With the mixer running on low, drizzle the eggs in. Now turn the mixer on to medium and run until everything smooth and creamy. Add in the cornstarch, vanilla and cooled cream and turn on low. Run for one minute and then scrape down the bowl one last time. Run the mixer again for one more minute. Everything should look very smooth now.

Using an ice cream scoop, carefully drop spoonfuls of cheesecake on top of the carrot cake and gently use an offset spatula to spread it to cover the carrot cake. This step will be very difficult and take quite a bit of patience, because the carrot cake layer is now warm and mushy. The cheesecake will immediately start to sink into the carrot cake, but it will rise again. I wanted two distinct layers for this, but it would also work to marble them together if you’d like.

Move the springform pan into a larger round cake pan and add 2 cups water to outer pan. This will act as a double boiler while cooking the cheesecake and keep it from curdling. Return the cake to the oven and bake for another hour. The cake will still be jiggly in the center. Shut off the oven, pop the door open and allow to sit for another 15 minutes.

Working carefully, pull the pan out of the oven and then pull the springform pan out of the cake pan. Pull the aluminum foil off of the outside of the springform pan to make sure any water that has gotten inside will drain out. Let sit on countertop for an additional 30 minutes before moving to a fridge too cool completely. At this point, if you have the time, it is better to freeze your cheesecake in order to get it out of the pan without accidentally putting a finger through it.

Run a butter knife under hot water and then run around the side of the pan in order to loosen the cake from the pan. Unlock the rim and remove the cake. Carefully flip the cake over and remove the bottom foil-wrapped base to the springform pan.

Place the cake on the serving plate and return to fridge until you are ready to garnish.

Coat the pecans in the egg white and then add them to a bowl filled with sugar and cinnamon. Toss the nuts, coating them completely. Spread the nuts evenly on a parchment-lined baking sheet. Bake at 250 degrees for one hour, stirring them every fifteen minutes. Allow the nuts too cool completely.

To Make The Chamomile Whipped Cream:

Pour cream into clean mixer bowl and mix on high using whisk attachment. Whip until soft peak just start to form and then reduce the speed to low. Add in the powdered sugar and vanilla and continue to mix until it’s well-combined. Turn the mixer up to medium to finish whipping, creating slightly stiffer peaks without over-whipping.

Put a large start tip into a pastry bag and then fill with your whipped cream. Pipe onto the cold cheesecake in whatever design you would like, then garnish with candied pecans and drizzle with honey. 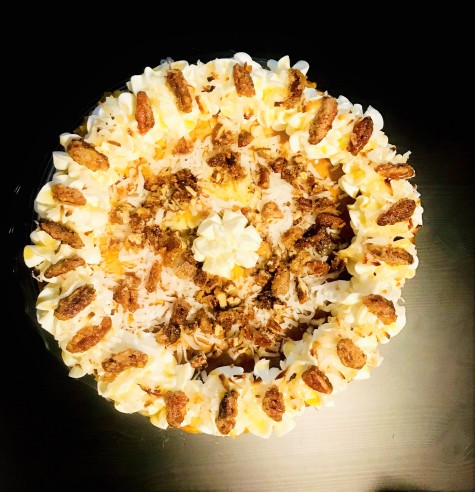 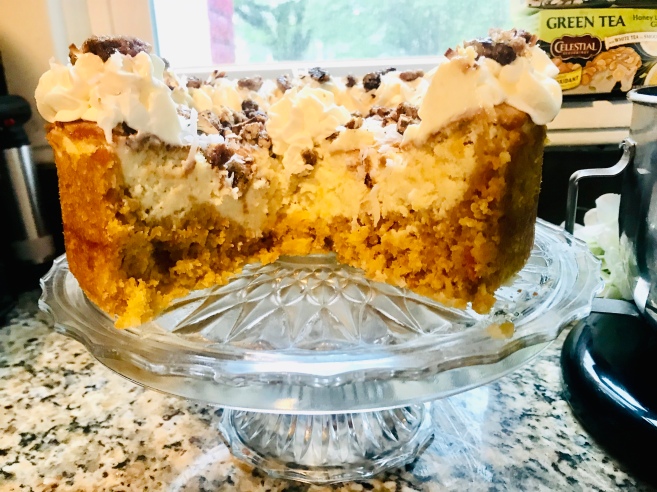 I made this for Mother’s Day and it was a hit with my family.  It seems like it will be overwhelmingly sweet and rich, but it didn’t eat too heavy.  The salted nuts and hints of lemon zest especially balanced the cake out.  I would recommend this for anyone who loves carrot cake. Or cheesecake.  Or honey.